A brief history of the award-winning studio Yoga One in downtown San Diego (with a mission to help as many people as possible live healthier and happier lives and a strong focus on community-building) as told through the eyes of its loving parents and Founders, Amy and Michael Caldwell.

An interview between Michael Caldwell, Co-Owner, and Laura McCorry, Yoga One Blog Master.

Laura McCorry: Many of us have heard the story about you and Amy falling in love, wanting to travel the world, selling all your possessions, picking a country that started with “A” and apple picking in Australia which set you both on the path to yoga. When did you decide to become yoga teachers?

Michael Caldwell: By the time we were in Nepal we were pretty serious about our yoga practice, meaning we did it whenever we could. Finding time was a challenge because we were trekking to Mt. Everest base camp. That generally meant walking all day until we found some nice family to take us in. Dahl batt and rice was the standard for dinner. With a full belly we almost always immediately crashed, exhausted and satisfied on the first available horizontal surface.

It was in one of these welcoming accommodations with a handful of other travels, including James, Teddy “McChocolate”, and Richard, that we found ourselves with a little extra time and energy. Somehow it came up that we’d been practicing yoga. And since Amy has always been more advanced than Michael, she was coaxed into leading the group. That, as we can recall, was the first class she ever taught.

LM: When did Michael start teaching?

MC: Right. Michael didn’t start teaching until a couple of years after Amy. Yoga One was up and running and we had picked up some corporate classes. We didn’t have enough teachers to cover one of our classes at Cox Communications, so Michael had to do it. And he’s been teaching with decreasing reluctance ever since.

LM: Why not just teach yoga at the park or at other studios? When did you know you wanted to start a small business and open a yoga studio together? That must have taken a huge leap of faith.

MC: Amy was teaching in the park and at dance studios, etc. The Yoga One studio was originally party of the adjacent gym, at that time called Body Works. When it got cold outside, Amy moved her growing park yoga class around town trying to find a reliable space. Over time, the classes were doing so well that Rich Roe, the gym’s owner, suggested we sublease it from him and start our own studio. So that’s what we did. It was very organic so it didn’t really require much of a leap of faith, just a lot of hard work and love.

LM: You both teach yoga and you both make business decisions, would you describe your roles in similar or different terms?

MC: Amy was the big boss until we had our first child. Then Michael took over most of the day to day business operations with Amy looking over his shoulder to make sure he was doing it right. Amy still keeps her eyes on things but increasingly she is focused on preparing and leading the Yoga One Teacher Training courses, which now happen up to three to four times a year (including the courses at SDSU / ARC).

MC: Lots of deep breaths! Like our yoga practice, finding that balance requires constant attention. When we realize we are overdoing the work aspect, as quickly as possible we attempt to swing back to the life side. In order to be as available as possible for our children, we mostly work from home. And we’ve argued about establishing work spaces and times in which it was ok and not ok to talk about “business.”

When you operate a small business the work is never done and when your work partner is also your spouse there is never any out of the office time… when you combine those elements and also work from home, finding balance is a tight wire act. So now we try not to talk about work in bed!

Yoga One is our first baby and initially required all of our attention at all hours. Now 15 years later, the studio is a little more self sufficient but still acts up from time to time like any teenager. When it needs us, we want to be there for it. The fact that we love what we do and the people we do it with helps tremendously.

We always want to be learning and growing. We feel we do a good job with offsite, specialty and corporate yoga classes so we are looking to expand in that direction. Our Yoga One Teacher Training program is truly a life enhancing experience. We’ve had over 250 people attend our course. Many of them want to continue to deepen their practice and expand their skills, so we are working on putting together a 300 hour Yoga One Teacher Training which then will provide graduates with a 500 hour designation. We will be doing more festivals and retreats. There is so much we want to do. (:

LM: Throw it back to the very first class taught at the studio, under the familiar skylights, what was that like?

MC: Super exciting! Amy was leading class with the students who had followed her from the park and the various around town spots and the gym’s students were there as well. (That was the deal we made for using the space). We had to walk up the stairs through what is the current gym’s entrance, down the back stairs and along the back hallway to what used to be the entrance to the studio and is now walled over. We’d wait in the back hallway while the spin class or something was finishing and talk in the hallway with the students. It was a great time… so new and fun.

LM: You and Amy have always (since I’ve known you) been consistent about calling the teachers and students at Yoga One family, and I know this is intentional and heartfelt. How long did it take you before you realized you were building more than just a business?

MC: Immediately. We were building a family from the get-go. Remember we had recently returned from backpacking around the world for 3 and a half years so we were wide open and receptive. We were (and still are) about fostering friendships and building community.

People used to come up to us in the park and ask what kind of dance we were doing and could they join us. Classes grew and grew and, as said before, when it got cold we moved around town from space to space, through a lot of trial and error. We used a night club in Hillcrest for a while that was under construction and the entire class literally had to climb over a pile of rubble to get to the practice space. That’s not a business, that’s a family forming.

We’re still working on making Yoga One a fantastic business, but we’ve already (in our opinion) cultivated a wonderful family. And thanks to all of the people who opened their space to us all those years ago. We couldn’t have done it without you.

LM: We all know the different milestones we celebrate for our children. What are some of the milestones you’ve seen and celebrated with Yoga One?

MC: There are so many that have touched us deeply and which we treasure! Those first few classes in the space and Rich, an established small business owner, recognizing we were on to something special and telling us we should sub lease the space. Amy teaching most of the initial classes and riding her bike around Downtown putting up flyers and spreading the word. Building out the back hallway so we had access to a bathroom! Getting voted “Best Yoga Studio” in San Diego City Beat and going to the awards party for the first time (and the other 8 times).

Amy appearing on the cover of Yoga Journal (twice). Creating the iYoga Premium app with 3D4 Medical. Leading a yoga retreat in Santa Barbara. Leading the first-ever yoga class aboard the USS Midway to 400 plus people. Releasing the Yoga One CD via Quango music group (remember cds?). Creating the office nook out of a dumb waiter shaft and closet (thanks Josh aka J-Money! Redoing the front hallway, that previous ceiling was painful to behold.

The 10 year anniversary party at the Porto Vista hotel and the 15th anniversary at the Hotel Solamar. The blog anniversary party and photo shoots. Having 120 people in the space for Y1 Studios Intimate Musical Evenings featuring Glen Phillips of Toad the Wet Sprocket and Sean Hayes among others. Workshops with fun visiting teachers like Kathryn Budig, Tiffany Cruickshank, Rachel Brathen, David Romanelli, Jill Miller, Diana Beardsley and others. Being on the news and in various publications is always fun.

Offering complimentary community classes and gift certificates so anyone and everyone can enjoy the joys and benefits of yoga. Seeing new students.  Seeing regular students. Seeing long-lost but returning students. Hearing that yoga has helped enhanced someone’s life. 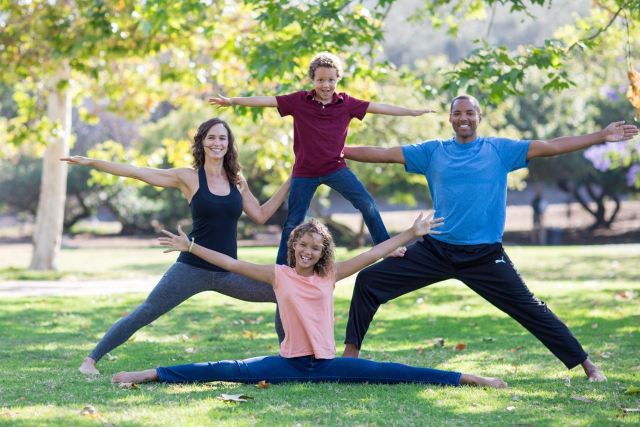 LM: Thank you so much for all the effort, continuing education, investment, time, and love you both pour into Yoga One: a yoga studio, a community, a family.

MC: Thank you, Laura, for birthing and raising the Yoga One blog and thanks to the fantastic Yoga One Teachers, Staff and students!